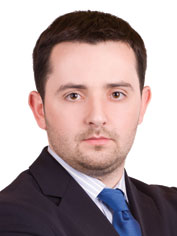 Volkov & Partners law firm was founded in February 2005. The firm has gained a deserved reputation for providing comprehensive and efficient legal services. It combines high standards of efficiency in legal services and management with a professional, modern approach based on flexibility and extensive client care.

Volkov & Partners has considerable experience in the successful, long-term representation of many international brand name corporations, promoting and protecting their interests in Ukraine as well as the interests of Ukrainian companies both inside and outside Ukraine. The firm aims to achieve its ambitious goals through sustained investment in managing knowledge and information, and by creating a working culture that enables its employees to offer consistently high standards of client service. The size and development philosophy of the practice allow the firm to maintain excellent relationships with clients, while ensuring they have access to the most effective legal advice and profound expertise. All the firm’s partners and associates aim to be innovative and provide the most effective solutions to problems that transcend the traditional boundaries of legal practice.

The year 2013 should have become a remarkable year for Ukraine in the area of international trade. During the whole year Ukraine was preparing to sign an unprecedented Deep and Comprehensive Free Trade Agreement with the EU in late November at the Vilnius summit. But being a footstep away from a free trade zone with the EU, Ukraine made a U-turn towards the Russian Federation. Notwithstanding the political ambiguity, Ukraine has remained active in utilizing instruments of trade protection. In 2013, Ukraine put the focus both on antidumping and safeguard investigations and reviewed a number of existing trade measures.

Last year was marked by Ukraine’s proactive position in application of antidumping measures, including initiation of new investigations as well as interim and sunset reviews.

Results of the antidumping investigation on imports of citric acid originating from China which were released on 27 April 2013, confirmed that certain producers used unfair trade practice while others kept trading on fair basis and eventually received the 0% duty. The Interdepartmental Commission on International Trade (the Commission) set duty for one producer at the rate of 8.15%, and for all other producers — at the rate of  24.74%.

In May 2013, the Commission imposed antidumping measures on imports of medicine glass bottles originating from Russia. The 13.08% duty rate was set for producer Berezyanskiy glass plant and the zero rate — for exporter Ostriv Jus LLC.

In April 2013, as a result of the sunset review of antidumping measures on imports of asbestos cement slates originating in Russia, the Commission prolonged the application of duties for another 5-year term at the previously set rate from 10.6% to 49.3%. Further on, the sunset review of measures on imports of lamps from China extended antidumping measures for another five year period at the rate of 78.96%.

In late July, the Commission initiated another antidumping investigation on imports to Ukraine of seamless corrosion resistant pipes from China. At the end of the year Ukraine ran a probe on imports of rubber-textile band from Russia.

In 2013, Ukraine also initiated sunset and interim review on imports of ammonium nitrate originating in the Russian Federation. Interim review in this case was initiated in order to set individual dumping margin/minimum prices or quotas for certain producers and exporters.

In March 2013, Ukraine officially published the Commission’s decision on application of safeguard duties on passengers ranging from 6.46% to 12.95%, depending on the engine capacity. The decision in fact had been adopted in April 2012 but was not enforced as it had not been published in the official Ukrainian newspaper. This error was corrected in 2013, but caused a great stir among Ukraine’s major trade partners resulting in retaliation measures from Turkey and initiation of a WTO dispute by Japan.

The main issue that should be highlighted in connection with the auto case is that Ukraine enforced decision one year after its adoption, thus violating the prescribed terms of the investigation. Moreover, the period of investigation was 2009-2011, which is too far from 2013. Second, Ukrainian authorities could not show an increase in imports through this period, instead, a sharp decrease was observed. In addition, highly questionable is existence of unforeseen developments that led to increased imports. This issue, in fact, that was not investigated as required by WTO practice. These and other defects resulted in retaliation measures from Turkey which increased the import duty on walnuts from Ukraine and this way compensated over USD 6 million of losses caused by the decision. Japan and Russia also raised the issue of retaliatory measures in the course of consultations.

In March 2014, the Dispute Settlement Body of the WTO established a panel in the dispute concerning Ukraine’s safeguards measures on autos at the request of Japan. However, the Government of Ukraine already announced that the safeguard duties were decreased by 30% with a possible further reduction. Most likely, this dispute will force Ukraine to revise its policy of conducting safeguard investigations and bring it in line with WTO practice.

Among general negative perception of auto case, Ukraine shortly after enforcement of the main decision excluded from the scope of SG duties hybrid cars with engine capacity at 1000-2200 cm3 until 28 February 2014. It is a fair decision, as Ukraine doesn’t have her own production of hybrid cars. But on the other hand it is hardly to believe that we would be able to start hybrid cars production by February 2014, thus extension of this decision is needed.

Having suffered from cheap import of porcelain and high gas prices during the last year, in May 2013 domestic producers of porcelain initiated a safeguard probe on imports of kitchen and tableware porcelain. After the imposition of the preliminary antidumping measures on imports of porcelain by the EU and the decision to apply safeguard measures on the same product by the Customs Union of Russia, Belarus and Kazakhstan, it was anticipated that trade flows of porcelain from China would reach Ukraine shortly. Despite the fact that China has more than 80% of Ukraine’s porcelain imports, safeguard measures were the only effective tool that could protect producers from massive imports and provide a possibility to adjust to the economic conditions for companies who recently introduced production of HoReCa porcelain, which is new on the Ukrainian market.

All the requirements for application of SG measures were observed: a recent, sudden and sharp increase in imports both in absolute and relative terms compared to domestic producers and consumption; unforeseen developments which resulted in increased imports; serious injury to domestic producer. Imports of porcelain in Ukraine with its major share from China required application of a safeguard measure that would combine effective protection of domestic producers from low priced China imports and high priced imports from the EU. In particular it should be noted that in September 2013 the Customs Union imposed a safeguard measure in the form of a specific set as a specific sum per unit of goods. The Customs Union imposed such duty in the amount of USD 1479 per one ton of porcelain. In practice, such measures made Chinese imports more expensive as it is much cheaper compared to the EU’s one. In such case the level of protection against China reached almost 90%, but for the EU only approximately 45%. Unfortunately Ukraine safeguard legislation, namely the On Application of Safeguard Measures against Imports to Ukraine Act of Ukraine provides no possibility to impose a safeguard measure, but only in the form of a percentage of the customs value (ad valorem duty). We are of an opinion that in modern trade relations such loopholes in the legislation should be removed since Ukraine would not be able to use safeguard measures as effective mechanisms of protection. In this connection and so because of this I look closer at Customs Union legislation, which is quite progressive and flexible.

Our practical involvement in trade remedies proceedings in Ukraine after its accession in the WTO in 2008 showed a number of loopholes in domestic legislation, which do not allow domestic producers to protect their interests effectively. Therefore, transformation and improvement of domestic trade remedies legislation is essential for Ukraine.

First, the On Protection of Domestic Producer against Dumped Imports should be improved in connection with certain extension of dumping definition, injury and causation to make it more coherent with WTO practice. Second, a new regulation should be developed covering dumping margin calculation, its methods and practices according to the existing standards in the EU and the US. This would definitely allow more options for domestic producers to defend their interests to compete effectively both in domestic and export markets.

Changes also have to be made in the On Application of Safeguard Measures against Imports to Ukraine Act. Since safeguard measures are implemented against fair trade practice it is a “must” to have precise regulations in this sphere. Our experience shows that the Act requires modification in connection with (i) definition of safeguard measure and its forms that may be used against imports (not only a duty or quota as it is provided now) (ii) description in details of the procedure in connection with the rights of applicant in each stage of the investigation and (iii) specification of safeguard measure calculation, including its methodology.

And the last element in the triad of trade protection laws which requires improvement is the On Protection of Domestic Producer against Subsidized Imports Act. The Act regulates conduct of countervailing investigations in Ukraine, but in fact since its accession to the WTO Ukraine has never used this instrument. This is not only due to the complexity of economic calculations, but also due to the fact that certain provisions of the Act are not in line with WTO norms. The Act was intended to be modified, but due to change of the Government it was returned to the Ministry of Economy for resubmission. Our general opinion is that it should be made very clear in connection with the definition of subsidy and its form and without any doubts the methodology of the countervailing duty calculation should be developed preferably in a separate regulation in accordance with best EU and US practices.