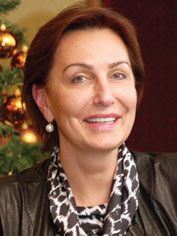 Dr. Irina Paliashvili has special expertise in the area of subsoil use and co-authored Ukraine’s Production Sharing Agreements legislation. She is the President of RULG-Ukrainian Legal Group, P.A., a law firm with offices in Kiev and Washington, DC 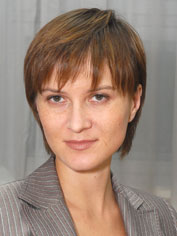 Olga Nevmerzhytska practices primarily in the spheres of commercial law and tax law, oil and gas legislation. She also has experience in the fields of financial and real estate law, currency regulation, banking law and other

RULG-Ukrainian Legal Group (ULG) is a full-service law firm based in Kiev and Washington D.C. that provides comprehensive legal support to international corporate clients doing business in Ukraine and other CIS countries. ULG also frequently serves as a local counsel to international law firms. We are able to deliver effective, timely and practical legal services because of the high skills and experience of our attorneys, gained as a result of practicing law and helping to shape legal developments in Ukraine. ULG advises on general corporate matters with special expertise in the areas of antimonopoly regulation, intellectual property protection, unfair competition, energy and upstream oil and gas. ULG participates in many professional organizations, including the U.S. — Ukraine Business Council in Washington D.C., the European Business Association and the American Chamber of Commerce in Ukraine, as well as in international legal networks including Lawyers Associated Worldwide, IBA and others. We organize the CIS Local Counsel Forum annually, a meeting of managing partners of top law firms from the CIS region with the participation of partners from leading international law firms (www.rulg.com/cisforum). In 2009, ULG became a founding member of the CIS Leading Counsel Network (LCN) and currently holds its rotating chairmanship. Our principal attorneys are Victor Kovalenko LL.M., Dr. Irina Paliashvili LL.M., and Alena Vasilenko. Detailed information about Ukrainian Legal Group is available at www.rulg.com.

The extraordinary political events that occurred in Ukraine at the end of 2013 and beginning of 2014, and resulted in the overthrow of ex-president Viktor Yanukovich’s regime and appointment of the new interim Government of Ukraine (“GOU”), accompanied by an extreme geopolitical crisis and occupation and annexation of the Crimea by the Russian Federation, threw the upstream sector in absolute disarray. This can be said, to various degrees, about all other sectors of the Ukrainian economy, but the upstream sector has been suffering most because it is so heavily dependent on the State regulation and many of its key actors are State-controlled companies.  Moreover, the loss of Crimea has had a watershed effect on this sector because a large portion of Ukraine’s reserves is located in offshore areas of the Black Sea adjacent to Crimea, and the State-controlled company operating in Black Sea offshore, Chornomornaftogaz, which is a 100% subsidiary of  the State-owned NAC Naftogaz, is located on the occupied territory of Crimea.  To this end, the new authorities of Crimea announced “nationalization” of Chernomornaftogaz (presumably in favor of the Russian Federation) with the “aim of future privatization” (presumably by one of Russia’s State-controlled companies, such as Gazprom or Rosneft).

It is expected that the above developments will result in the avalanche of significant claims by Governments and companies against other Governments and companies filed in national courts, international arbitration institutions, international courts, including through the mechanisms established within international organizations, such as for example WTO or the Energy Charter — all of which will further destabilize the upstream sector in Ukraine.

The political and geopolitical situations are so volatile that at the time of this writing it is actually impossible to predict how the legal regime for the upstream sector will develop, and what long-term strategy and priorities, for the energy sector in general and the upstream sector in particular, will be established by the new GOU, as well as when and how this new GOU will be formed.

Usually, despite various changes in policy, our previous annual overviews showed consistent trends in the upstream sector, especially during the entire period of ex-president Yanukovich regime, which lasted almost four years.  In this overview, however, because of the abrupt regime change, we need to analyze two different periods: the first one, under previous GOU, lasted until 21 February 2014, when ex-president Yanukovich and some of the most senior officials in his GOU (including Ukrainian Fuel and Energy Minister Eduard Stavytsky) left the country, and the second period starting 27 February until the present time, when the new interim GOU took over and Crimea was occupied and annexed by the Russian Federation.

It should be noted that many of the developments and tendencies of the first period might be no longer relevant because they were based on the policies and priorities of the previous GOU.  At the same time, because the previous GOU was quite consistent in pursuing energy independence and opening up the upstream industry to foreign investment (albeit on their own terms, which sometimes could be regarded as rather exotic), it may be expected that the current interim GOU, and future GOUs, will continue many of the same trends, but possibly in a different format.

During the first period, the previous GOU continued to attract big-scale international investment in exploration and production of domestic natural resources, most importantly Unconventional Resources (Shale Gas, Tight Gas, Shale Oil, etc.), as well as development of the Black Sea. These investments were attracted on the basis of the most modern, stable and attractive legal and fiscal instrument available to investors in the natural resources sector — production sharing agreements (PSA).

Although as a rule a PSA are offered on the basis of a tender, which was the case with the two major PSA signed in 2103 with Shell (for the Yuzivska subsoil area) and Chevron (for the Olesska subsoil area), the previous GOU developed the legislative basis for an exception from this rule, a new mechanism under which a PSA can be granted without a tender by converting the existing Subsoil License (“PSA Conversion”).

Although Eni PSA has a major significance for Ukraine’s energy sector as the first precedent of the PSA Conversion, unfortunately one of the Ukrainian PSA parties — Chornomornaftogaz — and the location of all four subsoil areas in the Black Sea appear to be outside of Ukraine’s control at present because of the annexation of Crimea by the Russian Federation.  Therefore, the practical fate of the Eni PSA is unpredictable.  At the same time, it remains a road map for the future PSA Conversion projects in Ukraine, should the current interim GOU or future GOUs wish to continue offering this mechanism to investors.

One more PSA project was close to signing in 2013, following the PSA Tender for the Skiphska Subsoil Area on the Black Sea Shelf, which was won in August 2012 by a group of investors led by ExxonMobil.  This PSA, unfortunately, was entirely derailed by the annexation of Crimea.

Surprisingly, in contrast with 2012, in 2013 the previous GOU did not carry a single PSA tender, although at least two tenders were publicly promised: the repeated tender for the Forosska subsoil area on the Black Sea Shelf (the first tender in 2012 did not attract any bidders) and a new tender for Slobozhanska onshore area in Kharkiv Region (Shale Gas and other hydrocarbons). One would expect that based on the success with other tenders followed by signing of the PSA, the previous GOU would be eager to capitalize on this success and carry on.  For some reason, perhaps the change of geopolitical course — when ex-President Viktor Yanukovich refused to sign the EU Association Agreement in November 2103, no PSA tenders were held in 2013.

As to the second, current period, it started with the appointment on 27 February 2014 of the new interim GOU, which remains in power at this time. This period has not so far been marked by any significant initiatives in the upstream sector.

After the interim GOU took over on 27 February, a number of corruption schemes were uncovered and investigated in the upstream sector. The shady practices of the previous GOU and also of its predecessors in terms of issuing Subsoil Licenses definitely must be punished and the issued Subsoil Licenses must be carefully reviewed and canceled if necessary, but for the future the GOU needs to establish a clear, unambiguous, transparent and competitive mechanism for issuing Subsoil Licenses, which would benefit the State and legitimate applicants rather than various well-connected entities.

We do not expect any serious legislative changes in the Licensing Regime until the new version of the Subsoil Code is adopted, which has been discussed in numerous versions for years, but is not currently pending at the Parliament.  The latest news is that yet another draft of the Subsoil Code was promulgated by the Ministry of Ecology on 25 April.

Occupation and annexation of Crimea by the Russian Federation brings a substantial negative effect on Ukraine’s upstream sector, and creates a legal limbo for all parties concerned, in particular the investors.

At the present time, Russia considers Crimea an integral part of the Russian Federation, while exercising its practical jurisdiction over Crimea, and Ukraine considers Crimea an integral part of Ukraine, although with the status of a “Temporarily Occupied Territory”.  The relevant Act, which is called On Enforcement of Rights and Freedoms of Citizens of Ukraine on the Temporarily Occupied Territory was recently adopted and took effect (the “Crimea Law”).

According to Article 3 of the Crimea Law, the status of “Temporarily Occupied Territory” extends to (i) the land territory and internal waters; (ii) internal sea waters and territorial sea of Ukraine adjacent to the Crimean Peninsula, the exclusive (maritime) economic zone of Ukraine and adjacent Continental Shelf of Ukraine; (iii) the airspace above the afore-mentioned territories.

Although initially the draft of the Crimea Law stipulated a ban on any types of business activity that are subject to any kind of licensing (i.e. we suppose including the upstream development), in the final text this ban was removed because Parliament agreed with the proposal of the business community to regulate business activity in Crimea by a spectate law to be adopted in the future.

It is not at all what will happen with the existing oil & gas projects in Crimea.  The most notable project — a pending PSA for the Skiphska Subsoil Area on the Black Sea Shelf, led by ExxonMobil, will probably never result in the signing of an actual PSA because foreign investors signaled their intention to withdraw from this project.

Another important project to be developed offshore Crimea is the Eni PSA, signed back in November 2013.

Only one thing is clear with regard to oil & gas projects in Crimea: there will be extensive political and legal negotiations and disputes, irrespective of what solution Russia may offer to the current holders of subsoil rights.