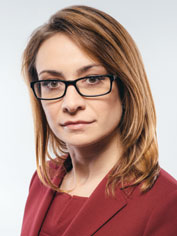 Based in Kiev, Odessa and Chicago, Lavrynovych & Partners law firm advises companies from over 30 countries. Nearly half of the firm’s clients are international companies, including multinational corporations listed in the Fortune Global 500.

Founded in 2004, the firm provides full range of legal services thanks to more than 35 committed professionals, staffed in Ukraine and the USA.

The practical and sound advice we offer to our clients is a result of teamwork of our expert lawyers. This approach is acknowledged by World’s Top 10 law firms who choose us to be their local partner in supporting large scale cross-border and multibillion transactions in Ukraine.

Our commitment to internationally recognized professional standards, as well as our efforts in being at the very top of our profession, results in highly valuable clients satisfaction and in external recognition we gain internationally and locally.

A well developed capital market provides a wide range of abilities to raise financing. Economic development is achievable, among other things, through improved structure of financing and better allocation of funds. On the other hand, development of the capital market inseparably depends on the economic situation of the country and world economic environment. The economic situation in Ukraine has changed significantly with the onset of the world financial and economic crisis and the latest political developments. While it is obvious that a new investment boom into Ukraine is hardly expected until the political situation becomes stable, the practical steps required for attracting funds should be considered and implemented as a matter of high priority of state development policy.

Market development is encouraged by market participants. For the capital market’s participants there are two constitutional playgrounds available (a) to buy and sell long-term debts securities, or (b) to buy and sell equity-backed securities. In the preceding 2013 the long-term debts securities were clearly on top in the Ukrainian capital market. According to publicly available information, in 2013  Ukrainian debtors received USD 9.4 billion through Eurobond issues, including the issue of 2-year maturity Eurobonds in the amount of USD 3 billion by Ukraine. Some of the biggest Ukrainian companies were Eurobond issuers in  2013, companies, such as Oschadbank, Ukreximbank (both are the state banks), Ukrzaliznytsia, Mironivsky Hliboproduct, UkrLandFarming, DTEK, Mriya and Privat Bank. The main reasons why Ukrainian market players are going for external bonds are: (1) high interest rates offered by Ukrainian banks, and (2) reluctance of Ukrainian banks to provide long-term credits. Other priorities of Eurobonds issuance are as follows:

— it is a public tool which is of interest for a wide range of investors;

— it is cheaper than an IPO;

— it enables the attraction of substantial investments in foreign currency;

— it may be structured to be a tax free withholding.

While the following are the cons  of Eurobonds:

— necessity to bear transaction costs against uncertainty regarding the outcome;

— high threshold of the total issue amount  (usually, it is not efficient to issue Eurobonds in an amount less than USD 50 million).

Eurobonds issued by Ukrainian issuers are listed mostly on the Irish Stock Exchange due to the high standard of regulation and efficient listing process. Under publicly available information a number of Ukrainian companies are in negotiations to issue and list their bonds at a Moscow-based stock exchange but Ukrainian laws are restrictive and create barriers to this.

A syndicated loan, which is quite a young financial tool, is becoming a good option versus Eurobonds. Syndicated loans are loans provided by a group of financial institutions on terms agreed by the parties. The main advantages of the syndicated loan are its express arrangement and closing. The borrower can receive funds within 2-3 months from the starting point of the negotiations. Another advantage is the possibility to pay the debt earlier, which enables money to be saved. However, deciding to go down the route of syndicated loans, a company has to be aware of the following:

— the syndicate of financial institutions usually dictates its terms to the borrower;

— legal due diligence of the borrower is usually a must;

— Ukrainian currency control restrictions can be an obstacle or, in some cases, a deal breaker.

An IPO certainly has many advantages for issuers which are more or less known and have been discussed in the mass media many times. The advantage which has become the top one due to latest events is that sovereign credit ratings follow after the business case of the issuer. This makes an IPO a good solution for Ukrainian issuers in times of political instability. Among those issues which, however, are still obstacles for Ukrainian companies taking the IPO route are the following:

— the terms of listing depend on the stock exchange and they are, usually, very strict;

— huge amounts of pre-IPO work have to be completed, including legal due diligence, preparation of financial statements according to IFRS and preparation of a prospectus;

— the issuer has to be absolutely transparent;

— ongoing post-IPO reports have to be duly completed and provided to the stock exchange and investors.

While deciding which route to go down, the Ukrainian company seeking investment has to, first of all, decide which target it is trying to achieve since the route will, in the main, depend on the target. Once the vision is more or less clear, the available financing options should be considered carefully and in more detail, together with a team of high level professionals. These exercises will allow the company to make a correct decision and fairly evaluate its resources required for its implementation.

Coming back to Ukraine, mainly as the partner of Ukrainian private companies, which has powers to set up an efficient framework for the operation and development of the capital market, it’s worth mentioning that in those developing countries which made a huge break in attracting investments, state support started with implementation of capital market development strategies. Such strategies included measures which allowed domestic market infrastructure and business practices to become fully aligned with international standards. In Ukraine such a strategy should also stipulate practical steps which would increase trust in Ukrainian people in domestic stock exchanges, which is not the case to date, and make our citizens strong and reliable market players.