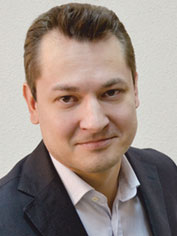 Attorney-at-Law, registered Patent Attorney and Partner with Pakharenko & Partners. Alexander’s practice in the intellectual property field includes counselling on the protection and enforcement of IPRs, with a particular focus on anti-counterfeiting and anti-piracy activities, IPR-litigation and licensing

Pakharenko & Partners was established in 1992 and is one of the leading players among intellectual property and law firms in Central Europe with offices in Kiev, Ukraine, and London, UK.

The firm provides full IP service coverage to develop successful protection and enforcement strategies for our clients, covering the development of IP portfolio; acquisition and commercialization of IPRs; assistance in conducting market research and market monitoring; and management and enforcement of IPRs at national and international level. Pakharenko & Partners deal with all intellectual property assets, including patents (inventions and utility models), designs, trademarks and geographical indications, domain names, copyright and related rights and plant breeders’ rights.

The company’s services in this field cover: registration of IPRs in the customs register and representation of clients following customs seizures; investigation of infringements; trap purchases; sending warning letters and notices to infringers; drafting and filing applications to the police in order to initiate criminal actions and cooperation with the police in preparation for raids; legal counseling on anti-counterfeiting and anti-piracy measures and developing anti-counterfeiting and anti-piracy strategies; and finally representation in courts in criminal and civil cases brought against counterfeiters.

The firm’s lawyers cooperate closely with the Ukrainian Customs Service in sharing information, coordinating actions, training customs officers and raising awareness of the best practices in combating counterfeiting and piracy.

Ukraine continues its expansion onto the Internet and in 2013 the domain .укр was launched in addition to the ccTLD .ua which was assigned back in 1992.

.укр is an internationalized domain name of the national top-level domain (IDN ccTLD) which has been assigned within the framework of the IDN (Internationalized Domain Name) ccTLD Fast Track Process approved by the Board of the Internet Corporation for Assigned Names and Numbers (ICANN) at its annual meeting in Seoul, South Korea on 30 October 2009, and which process enables countries and territories to submit requests to ICANN for IDN ccTLDs, representing their respective country or territory names in scripts other than Latin.

On 1 March 2011 ICANN announced on the successful completion of String Evaluation on proposed IDN ccTLD string for Ukraine, after that the application shifted to the stage of string delegation which completed on 28 February 2013 when the ICANN Board approved the delegation to Ukraine of rights to the domain .укр, which appeared in the root system of Internet domain names. After approval of the provisional rules of zone, in August 2013 .укр started its launch with the Sunrise phase that would have to run for a minimum of 5 months.

The rules for registration of the domain names in zones .ua and .укр are different. The general overview of both domains is as follows.

I. Domain names in the .UA zone

Under the rules of the .UA zone, registration of the private second level domain names in this ccTLD is restricted by registration of a trademark. In other words, a private second level domain name may be delegated only to an owner of a mark registered under the national or international procedure in Ukraine, or to his licensee. The request for delegation of the domain name should be accompanied with the respective copy of a trademark certificate (or official extract from the trademark registry), or with a copy of a license agreement.

Furthermore, the private second domain name in the .ua zone must reiterate the trademark as it was registered. The addition of other terms, including descriptive ones, to the mark in the domain name, is prohibited unless they are included in the mark.

At the same time, there are various geographic and general public second level domains in the .UA zone (like .com.ua, .org.ua, .kiev.ua, etc.), which are not restricted by any specific requirements for registration.

The Sunrise Period which initially had to run in the .укр zone until 4 February 2014 was extended until 4 March 2014 and allows brand/trademark owners (mainly companies) to register related domain names. The sunrise period may help brand/trademark owners avoid falling prey to domain grabbing or cybersquatting and possible legal disputes. Within this period the names of international and national governmental and public authorities, geographical indications, international non-proprietary names of pharmaceutical substances may be also registered.

Intellectual property rights and domain names are inter-related as, actually, nowadays Internet is the advertising forum and the marketplace as it creates the global platform for distribution, marketing, sale or delivery of goods and services by electronic means. Thus, companies doing business have a strong desire to register domain names akin to their products, trade names or trademarks, use copyright subjects and implement new technologies for doing business over the Internet.

At the same time the new “virtual” market has been adopted for sharing pirated content and selling counterfeits and such sales created additional hurdles in safeguarding intellectual property rights as it became even more difficult to trace the people behind such offending sales than in the “real” world.

For the time being, safeguarding intellectual property rights proves to be more difficult. At the same time, IPRs infringements, particularly counterfeiting and piracy, cause widespread economic harm and even pose a threat to public health and consumer safety.

Although IPR protection is very important in order to foster economic growth, innovation and creativity, Ukrainian IPR laws which were developed for the physical world have not yet been fully adopted to the new virtual world of electronic commerce.

And namely, the first references to the Internet naming and addressing system appear in the Decree of the President of Ukraine as of 31 July 2000 No.928 On the Measures for the Development of the National Part of the Global Informational Network Internet and Securing the Free Access to this Network in Ukraine refers to the Internet as to the global informational network.

At the same time, a year before adoption of the On Telecommunications Act of Ukraine, Verkhovna Rada of Ukraine adopted the On Introduction of Changes into some Intellectual Property Laws of Ukraine Act of 4 July 2002, No.34-IV by which the definition of the domain name was introduced in the On the Protection of Rights to Marks for Goods and Services Act of Ukraine and by which the use of trademarks, inventions, industrial designs, topography of integrated circuits on the Internet was qualified to be the use of respective intellectual property objects.

Such amendments provided legal grounds for the IPRs holders to pursue the IPRs infringements over the Internet and seek remedy before the local courts. At the same time, there is still no well routed court practice for consideration on the disputes related to the use of the IPRs over the Internet.

In fact, it appeared that the historical development of the Internet masked some of the more theoretical problems. For instance, there are problems with defining jurisdiction on the Internet and for the time being there is no landmark court judgment in Ukraine which might illustrate the settled legal position on the jurisdiction of disputes related to the IPR infringement over the Internet.

This is due to the fact that a trademark is protected by the laws of a country where such trademark may be registered. Consequently, a trademark may have multiple registrations in many countries throughout the world. On the other hand, since the internet allows for access without any geographical limitation, a domain name is potentially accessible irrespective of the geographical location of the consumers. The outcome of this potential for universal connectivity is the lack of a uniform approach as to the jurisdiction of the domain disputes as in some instances it is very difficult to define before the forum of which country a dispute should be heard.

The more serious jurisdictional problems are now beginning to appear in cases that are more complex than trademark-domain name disputes, and for instance the one which refer to sharing the copyrighted content over the Internet. Such disputes are settled on a case-by-case basis.

In the light of this, as the court proceedings are time- and costs- consuming processes, the IPRs holders in most instances prefer to find the path for the settlement of the dispute out of the court and adopt for this different alternative dispute resolution (ADR) procedures.

For instance, the practices of sending of cease and desist letters proved to be efficient tool to challenge illegal use of intellectual property rights over the Internet.

Unfortunately, such ADR procedure as the Uniform Dispute Resolution Policy adopted by the ICANN to various types of disputes between registrants and third parties over the registration and use of domain names is not applicable for domains in the .UA zone.

Although UDRP is included in registration agreements for all ICANN-accredited registrars, neither cc.TLD .UA, nor .УКР has implemented UDRP.

The rules of the .UA zone do not set any local alternative dispute resolution procedure either.

The Rules of the .UA zone which provide that only the holders of the trademark rights registered in Ukraine may have the second level private domain names have also exacerbated the conflicts between domain names and trademarks as the domain registration process has led to the practice of squatting of trademarks when squatters take advantage both of the “first come, first served” domain registration system and “first-to-file” trademark system.

Yet the more, when the On the Protection of Personal Data Act of Ukraine entered in force on 1 January 2011, the .UA Registry deleted all the contact details of individuals which hold the domain names in the .UA zone, due to which it became more difficult to find violators.

This problem was raised recently at the third annual conference .UA dom conducted by the .UA Registry in December 2013 as such concealment of the data is not in the interest of the public good. There was discussion of the possibilities of the mechanisms of disclosure of the personal data of the holders of domains in the .UA zone in the Who is records. For instance, it was suggested to obtain consent to the disclosure of data upon delegation of domains. It has been also noted that in global practice the details of registrants are typically concealed using proxy and privacy services rather than under data protection laws, and such services allow a domain name to keep a certain identity and contact details from appearing in public Who is information, but application of such services secure publication of valid contact information for any claims regarding offending domain name. It may be anticipated that the suggested path is workable, but its applicability requires further research. Factoring that the .UA Registry did not prove to be proactive, disclosure of the personal data about domains in the .UA zone in the Who is database may become yet another far-fetched project.

Thus, in light of the aforesaid it can be concluded that the constant increase in the use of the internet for commercial purposes has greatly increased the level of cyber crimes and other Internet— related offences. Thus, the legal protection of IPRs on the Internet is a serious issue which must be dealt with.